Find words on the WordSpiral to eliminate them from the game board. Try to eliminate all the letters on the Board. Watch the board shrink after each word is found. How many turns does it take to clear the board? THEN - ask the WordSpiral AI to Solve the same board you just played and see how many words it is able to find. Watch out - Word Spiral has a huge dictionary of 200,000 words.

Now available on Steam for the PC / Mac
and the Microsoft Store for Windows.
Comng Soon: Android and iOS

Challenge Mode is coming !!!
Play the weekly common game board for the highest score
under a new alternate scoring system.

Now on Steam (Windows and Mac)
and
the Microsoft Store
Coming Soon: Android and iOS 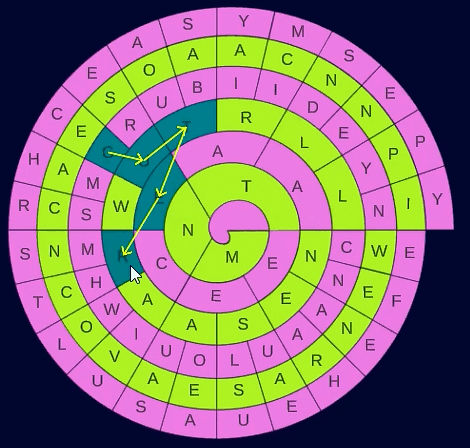 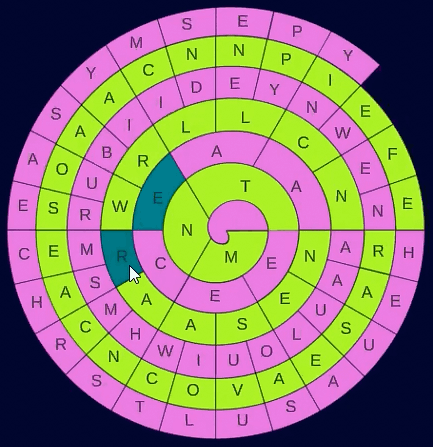 Double click the last letter to remove the word found 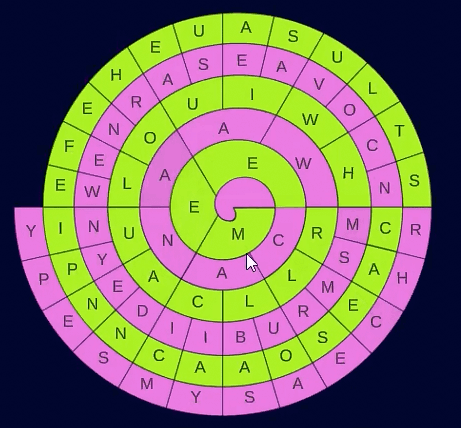 Watch the board shrink as each word is selected

The AI will find the best word it can find.
If there are no more words on the board it will tell you the game is over
and congratulate you for clearing the board 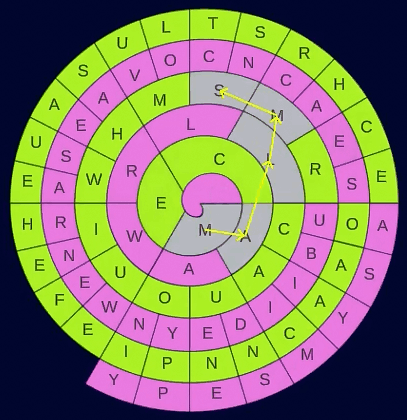 It could find hundreds of words along the way using its extensive dictionary. 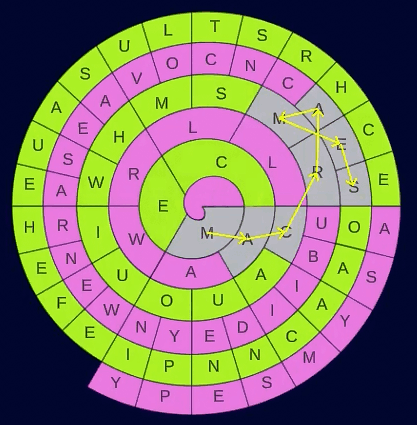 The Word Spiral AI will look through the game board searching for a good valid word to play. 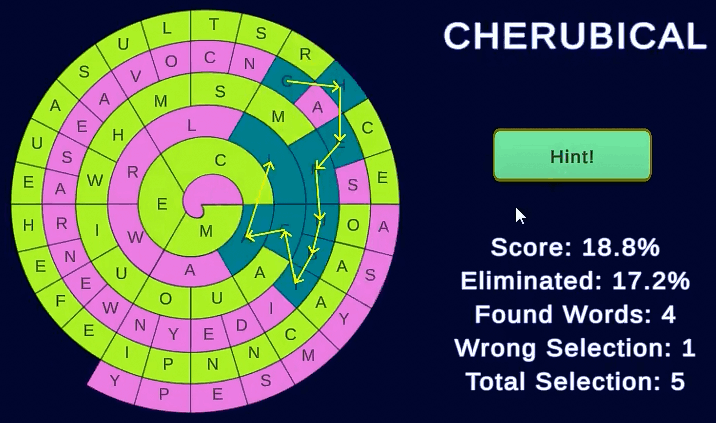 Until it finds its best choice. It could very well be a word you have never heard of given its 200,000 word vocabulary !!!

When you are done, ask the AI to play
the same game board 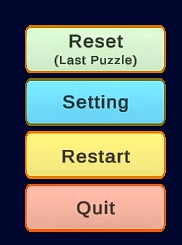 Press the Reset button to restore the board that you just played. 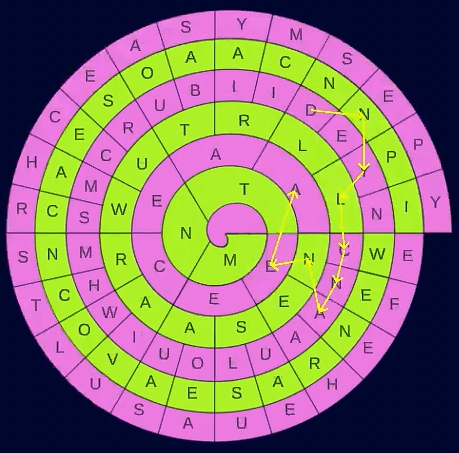 Your original game board is restored. You can play the same board all over again for a better score or ask the AI to show you what it can do with the game board. 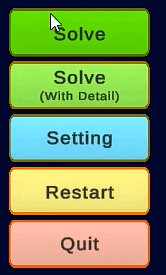 Solve will cause the AI to play your game board. Solve With Detail will show you the thousands of words it might find while solving the game board. The Abort button that appears returns to normal Solve mode.

To add more cards, hover on a card and click 'Add items' 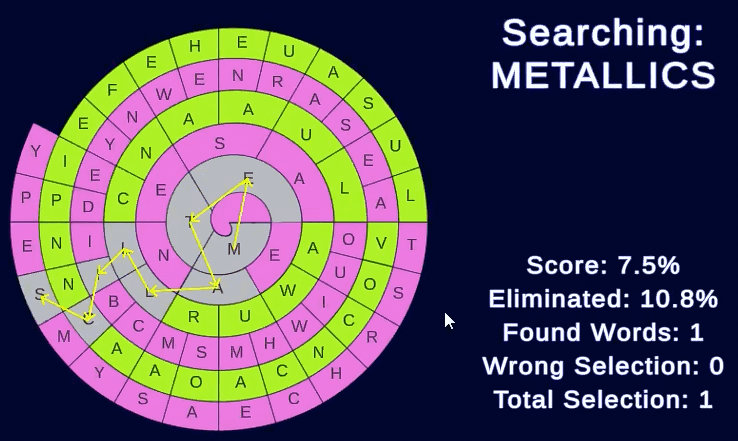 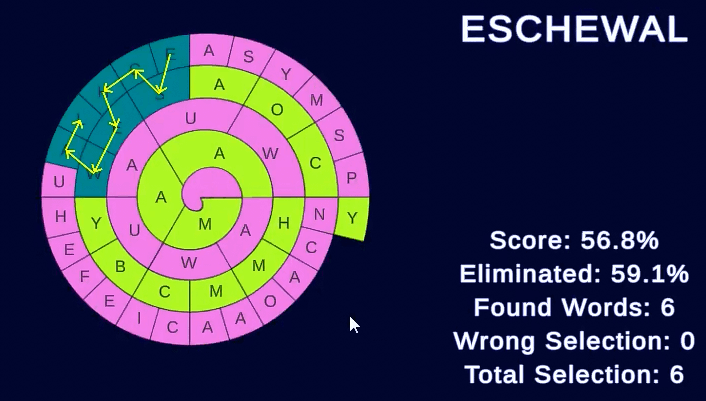 Watch the board shrink down as each word is found 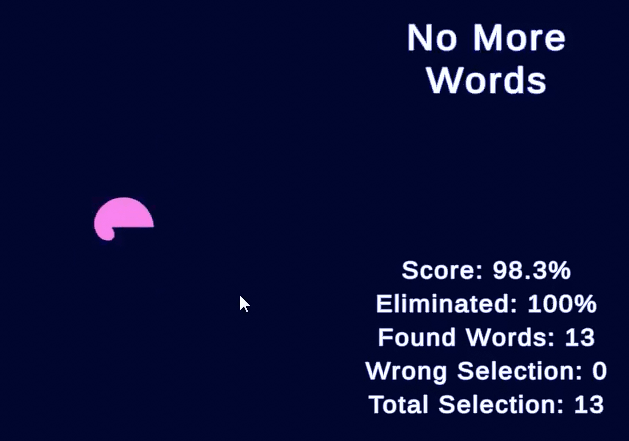 Down and down until no more words can be found 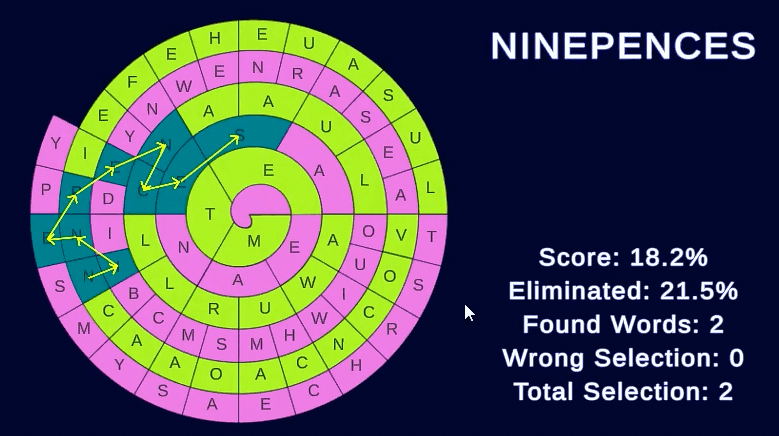 WordSprial determines a score after each valid word is found. The score is a percentage of the best possible score of the game. So the top score is 100%. The best possible score is to clear the entire game board in 10 turns. The score is based on the number of valid words found at any time, plus bonus points which are reduced at each round. A percentage is lost for unused letters at the end of the game. The user can tell if the game is over by asking if there are any words remaining that they did not see (use the Hint! button).

An alternate scoring system is coming as part of challenge mode. This uses a letter points system plus increasing bonus points for words of 6 or more letters. Challenge mode pits you against other WordSpiral players around the world, for the highest weekly score. No AI or Hints in challenge mode!!! 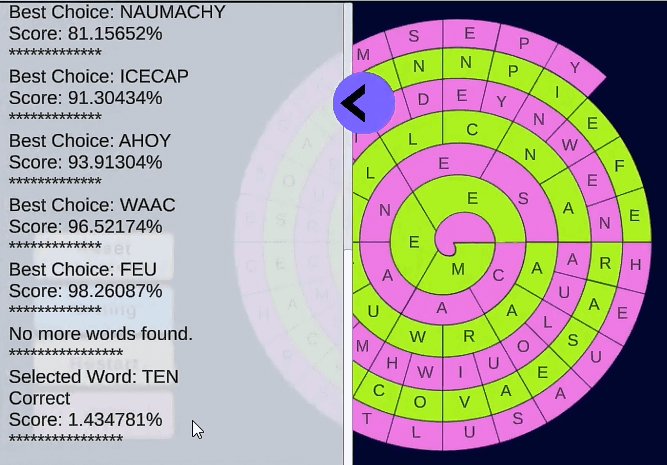 See all the words you and the AI have played

Press the ">" button in the upper left corner to see a scrollable list of all of the words that have been played and the scores. 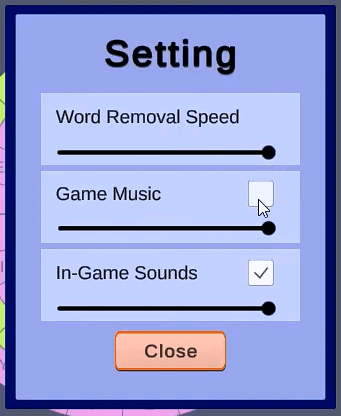 The settings screen allows you to turn the music and sound effects on and off and adjust their volumes.

This screen will be used to select the scoring mechanism to use in the game. Challenge mode always uses the Point System instead of the percentage sytem.

Send us an email